You are here: Home / Beef / Beef Stir-Fry with White Rice

Preheat Paella Pan for 4 minutes at medium-high heat. Add steak (previously seasoned with cumin, salt and pepper to taste); let it brown on one side for 4 minutes, flip steak over and cook for 3 more minutes. Add garlic and limo chili pepper. Cover with Redi-Temp valve open. When it whistles (3 minutes), remove meat with the juices so as to keep it moist. With the Carving Knife, cut it into ½- inch wide stripes.

In the same Paella Pan, add onions and sauté for 1 minute; stir frequently. Add ¼ cup of vinegar and continue sautéing for 1 extra minute or until vinegar evaporates. Remove onions and place them in the 2-quart Mixing Bowl. Repeat procedure with tomatoes.

With the Chef’s Knife, slice potatoes into French fries. Preheat the 10 ½ -inch Skillet with the oil for 7 minutes at medium heat. Add half of the potatoes and deep fry for 10 approximately or until slightly golden. Using the Slotted Spoon, remove the French fries; drain on paper towel and season with salt to taste. Repeat the procedure with the other half of potatoes.

In the 4 quart Dutch Oven, add 2 ¼ cups of water, cover and bring to a boil at medium-high heat.  Cover with Redi-Temp valve open.  When it whistles (approximately 6 minutes), add rice and salt to taste.  Cover with valve closed and reduce heat to low; cook for 15 minutes.  Serve immediately. 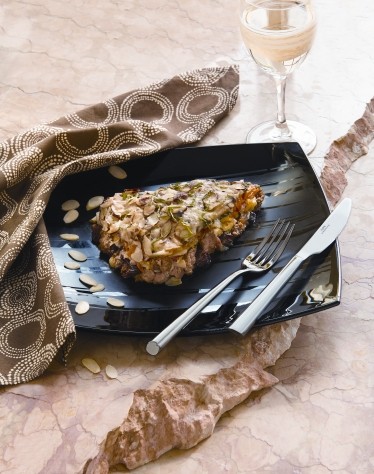 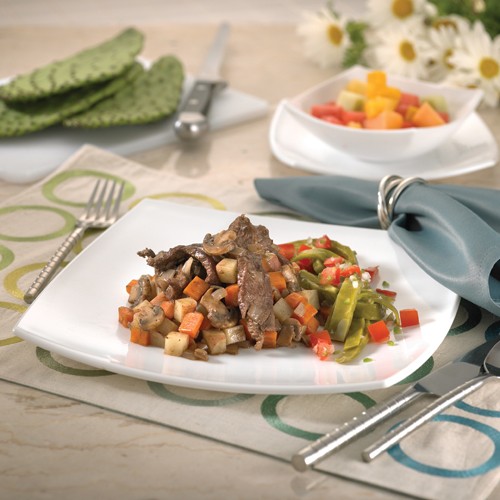